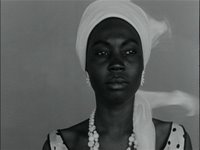 Generally recognized as the first feature film (at just over an hour) made by a black African director, La Noire de... arrives fully formed, with an angry political conscience and ambitions to critique the colonial and post-colonial experience that are, by and large, met. Of course, Ousmane Sembène was hardly a neophyte, having already published several novels that shed light on colonial, and immediate post-independence, African life. The brief tale of a young African woman who travels to the French Riviera to work as a nanny for a French family who had also employed her in Senegal, the film is an outraged coming-to-consciousness tale, as the young woman evaluates her own self-worth in light of the treatment she experiences at the hand of her employer. Although her ultimate fate is perhaps rather extreme, there's nothing unusual, even today, in some of the daily humiliations experienced; if Sembène's vision is disheartening, that's perhaps especially because little has changed in the relationship between colonizer and colonized in the intervening 40 years. Although Sembène received his formal cinematic training in the USSR, the film is shot through with the influence of the early nouvelle vague films, lending the film an immediacy and power that belie its relative technical limitations.