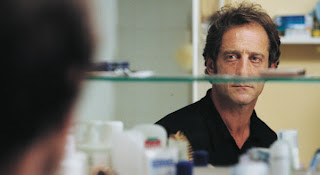 As Vincent Lindon ages, his face has started to acquire something of the heavy-lidded melancholy of Richard Bohringer, and his voice has developed a smoky burnish that's perfect for La Moustache, where he plays Marc Thiriez, a man who begins to doubt his own memories and perceptions of reality when his wife - and then others around him - appear to be living in a subtly different version of the world. Lindon plays the part absolutely straight - though there are twisted comic moments early on - and captures some of the same Hitchcockian paranoia of the men at the centre of recent French films like Feux rouges and Caché, men unable to understand - and worse, from their perspective, control - what is going on around them.

Director Emmanuel Carrère adapts his own novel here, and shows a fine eye for visual style, opening the film with a beautiful night-time shot of what we later realize is Hong Kong, and using the light and shadow of a large apartment set to underline the divide between Marc and his wife (played by Emmanuelle Devos, predictably good even in a smaller, and sometimes under-written, role).