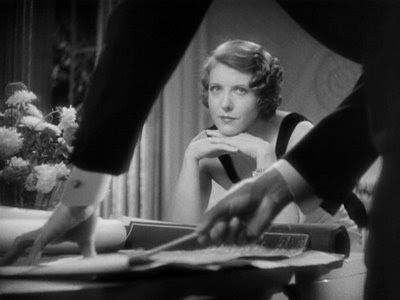 
Female packs an awful lot of action into its 60 minutes, paring many of the sequences right to the bone to make punchy points while still allowing opportunities for the supporting players to get in some choice bits. Ruth Chatterton plays Alison Drake, a female auto executive who chews up many of the men who work for her, discarding them - or transferring them to the Montreal office, in a running gag - as soon as they start to cling.

The first 40 minutes thus unspool as a kind of paean to female empowerment, at least in terms of permitting a woman to run a company as long as she behaves like one of the boys. However, even in these apparently pre-Code times, the prevailing social order is restored by the film's end; the reversal is so complete as to be almost literally breathtaking, though one wonders if the 1933 audience swallowed the whole thing.

Though the film has a brief running time, it's no throwaway. Considerable care went into the set design, for instance: Drake's office, with a huge picture window looking onto the manufacturing facility, is spectacular, while the staircase of her house, complete with a church organ, is an extraordinary creation. Perhaps that set appears in other Warner Brothers films of the period; another of their films is cited when two characters mention the Jimmy Cagney picture The Picture Snatcher, released a few months before.

Ruth Chatterton was a major star in the 1930s (though this film was my introduction to her work), and unusually for a female star she didn't break into films until she was in her mid-30s. Here she is paired with her then-husband George Brent, playing her main onscreen love interest. Brent's Irish accent and considerable charm slip through frequently, and the pair's scenes together, particularly in the early going, are played with great verve.