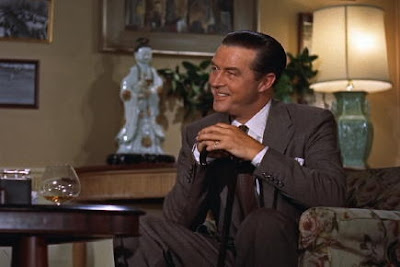 1954, US, directed by Alfred Hitchcock


Where Rear Window, which Hitchcock made immediately afterwards, looked outwards into the courtyard to observe others going about their lives, Dial M For Murder looks inward, confined almost entirely to a single apartment set, with the police in this case the outsiders trying to understand what has gone on. Although the film betrays its stage origins at times in both dialogue and set design, there's still a remarkable sense of visual space, such that we know the location of every room in the tiny apartment, and indeed often the locations of specific objects - critical to both the central act of violence and, later, to the police's unveiling of the crime.

Hitchcock's obsession with icy blondes is front and centre here, with Grace Kelly the object of abuse throughout the film - while others see violence as a game (shades of Rope) she's devastated both by the act and its aftermath - but his visual signatures are also present, for instance in a shot where one is character seen over the shoulder of another, practically a carbon copy of a shot in Secret Agent. While there's an enjoyable sense of poetic justice in the finale, the film's high point is reached early on, in a wonderful long scene between Ray Milland and Anthony Dawson, with Milland both charming and utterly reprehensible.

2012 update: David Bordwell has a terrific analysis of the film, suggesting that Hitchcock employed creative and unusual solutions to the various problems presented by stage adaptation -- something of a counter-argument to those, including Hitchcock, who dismiss the film as a minor work.

Ahh... I love this movie.
(not a very exciting or intellectual comment, but there you go.)
:)