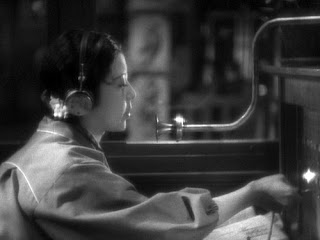 The picture above is a frame grab created by Jim Emerson as part of a fascinating post on staging and deep focus at his blog Scanners; he makes insightful comments on Mizoguchi's shot choices in one striking scene from early in the film, which establishes several of the key relationships in the film. That sequence is among the most interesting in Osaka Elegy, which feels at times like a dry run for his subsequent, and more confident, Sisters of the Gion, shot later the same year.