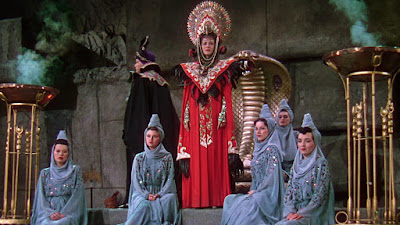 Wow. Where to begin. I'd previously only known Robert Siodmak as a director of noirish material so this lurid Technicolor frenzy came as something of a surprise. Even with Hollywood's loose approach to historical and geographical accuracy, this is fevered stuff, set on a series of isolated islands that feature both snake charmers and chimpanzees, not to mention both young Sabu, forced to utter his lines in a rather hideous pidgin ("I are..." etc.), among the "natives."

The film was one of a series featuring Maria Montez and Jon Hall (and Sabu in some installments), and the emphasis is on lavish escapism. Where others were already delving deeply into noir territory in 1944, including Fritz Lang in The Woman in the Window, this is pure distraction, completely goofy and unsurprisingly now treasured as a camp classic. The eye-opening cobra dance, performed not once but twice by the estimable Ms. Montez, is worthy of the price of admission by itself; Siodmak must have experienced severe whiplash shuttling between such material and the same year's psychologically acute Phantom Lady.

Note: This is part of my Watching Movies in Africa project. Cobra Woman was screened numerous times at Kumasi's Rex cinema in January 1951. The Ashanti Pioneer of January 18, 1951 includes a brief piece credited "By Our Film Critic," though the terminology employed owes more to the vocabulary of advertising than that of journalism: “Do you like the beautiful, are you fascinated by the mysterious, do you take to the colourful? If so, you cannot spend a more entertaining time than by being at the Rex Cinema to-night.” A number of Ghanaian newspapers were owned by entrepreneurs who also had interests in the cinema business; the same may well have been the case here though I've not yet tracked down direct evidence of the link. Update: I've since found evidence that the film was showing in Accra's Rex theatre as early as June 1946. That venue was owned by the same company that later screened the film in Kumasi, and by all accounts the contemporary rental system used in Ghana allowed exhibitors to keep films for up to five years.

The image above is taken from FilmFanatic.org.