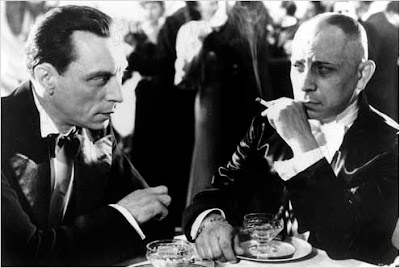 Pierre Chenal is one of those directors I'd earmarked for further consideration, but while L'Alibi has the occasional visual idea of note it's memorable largely for the performances of Erich von Stroheim and Louis Jouvet -- and jumps up several notches in their scenes together. Von Stroheim plays a stage medium with something of a gangland backstory, and the film opens with him dispatching an enemy from his American days; that sequence, shot in back-projected fashion as two cars race across Paris, is quite arresting, both in visual terms and because we're not generally accustomed to films that eliminate the whodunit aspect so early on.

Josée Cathala suggests, in her book on Louis Jouvet, that the film's tension then comes from wondering when one of the main characters will crack, though for me the real frisson lies in the actorly confrontation between Jouvet and von Stroheim, a deliciously careful waltz between two experts in both their on- and offscreen incarnations. The more I see of Jouvet's filmography the more I'm convinced that he only rarely had vehicles worthy of his extraordinary talent -- though his busy theatrical schedule and his own rather dismissive view of the cinema, especially in the 1930s, didn't help -- but he's quite wonderful here as a Javert-like policeman, tenaciously on the trail of his man. The sequence in which he and von Stroheim speak partly in English is perhaps the highlight, though the language surely wasn't much of a stretch for Jouvet, who spent nearly two years in New York on a theatrical tour years earlier.