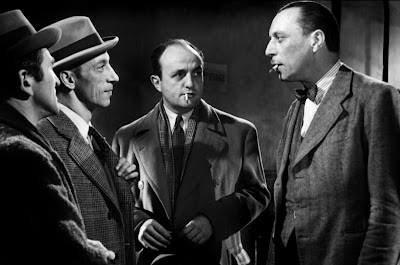 Almost certainly Louis Jouvet's best-remembered film -- the only near competition comes, I think, from Marcel Carné's Hôtel du Nord, which isn't even on DVD in the US -- Quai des Orfèvres also features one of his very finest performances, as a dogged cop whose lack of respect for his superiors has limited his career prospects. As I noted previously, Jouvet didn't often play characters from this neck of the socio-economic woods, and yet this feels like one of the most thoroughly inhabited of his characters, a remarkably subtle, even fragile creation, with unlikely elements that somehow hang together. I suspect that to some degree that's because it's among the more underplayed of Jouvet's roles, in particular when it comes to the character's gruff expressions of affection for an adopted son, moments that provide brief, telling insights into the man's heart without being excessively mined for sentiment.

Indeed, that's typical of the film as a whole: as Luc Sante comments in the notes to the Criterion DVD edition, the film teems with Balzacian life, depicting in piquant details the worlds of both the music hall, the police station, and the crime journalist fraternity, as well as a complex crime, all without an indulgent running time. The very specific world of the music hall dominates the opening section of the film -- I had forgotten that Jouvet doesn't even appear until 40 minutes in, which underlines, yet again, how he tends to dominate one's memory of even the strongest films. As with Clouzot's later, and altogether more lightweight, film Miquette et sa mère, you get the sense that the director retained a persistent skepticism about those who chose to make their careers on the stage, or perhaps it was just that he couldn't turn off his sociologist's eye for the details of human behaviour even when turned on a milieu in which he himself spent so much time.