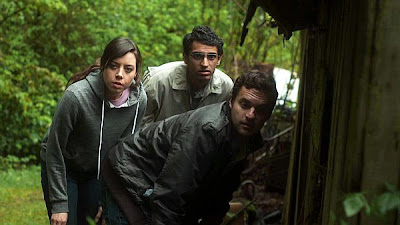 2012, US, directed by Colin Trevorrow

Who'd have thought that the indie time travel-romance genre had room for more than one entry? The tone is decidedly more comic on this occasion, with a pretty conventional subplot about the deflowering of a nervous young man (the film gets a good deal of fine comic mileage out of studiously ignoring this plotline as soon as it apparently plays out), and a screenplay that's rather schematic -- the main story about dealing with one's past is paired with a rather obvious repetition of that same theme within another character's story.

What we're left with then, is mostly a set of genial, occasionally piercing, character observations -- moments in which disparate people connect with one another, or fail to understand the nature of their connections. Trevorrow doesn't really grapple with some of the bigger character questions he raises, though -- while the non-resolution of the above subplot is rather enjoyable, elsewhere he simply ignores problems that he can't resolve, simply moving on from the sticking point as though it didn't exist. That's especially problematic in the main story, where unfortunately it undermines the credibility of the nascent connection between Aubrey Plaza, who is genuinely charming, and Mark Duplass, who plays a potentially irritating kook commendably straight, which is key to finding a note of sympathy in the man.