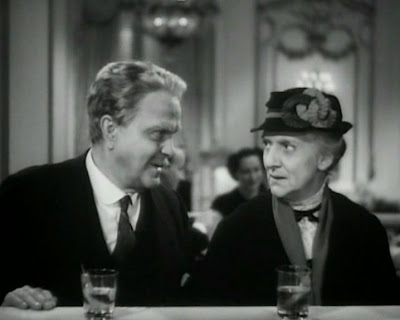 Though very different in tone -- elegiac, if not tragic at times, rather than comic -- Make Way for Tomorrow has the same remarkable facility with tone, McCarey making the smoothest of transitions between emotional registers such that he gives the sense of packing a much longer film into a brief running time. It's not as though the pacing is breakneck, either: McCarey is perfectly happy to linger over a scene, allowing it to reach the proper emotional climax, before moving on. Thus we get wonderful sequences like that between Victor Moore and Maurice Moscovitch, two old guys reflecting on their lives, or the scene in which a group of bridge players reacts to Beulah Bondi's phone conversation. And, most of all, the long farewell that concludes the film, and moves nimbly from sentimental to amusing to desperately sad. Bondi was just 48 when the film was made, but she plays older so effectively that I found it hard to believe her character was only supposed to be 70... In her rather quieter way, she's like a female Michel Simon, entirely convincing in roles decades her chronological senior.