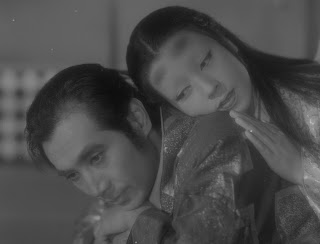 One of those rare films that fully lives up to its advance billing, Ugetsu Monogatari is a unique blend of realism and fantasy, told with great cinematic virtuosity. Set in the 16th century against a backdrop of civil war, the film opens, nonetheless, in a bucolic village, and the first 40 minutes are an exquisite depiction of peasant and family life, focused on tiny details of craftsmanship and family relations; the cooperation between farmer/potter Genjuro and his wife Miyagi is both convincing and deeply moving. Even as her husband senses the opportunities for enrichment created by the still-distant war, Miyagi makes clear her own contentment at her small family's place in the world; Mizoguchi delicately conveys the sense that there's much to lose even in this apparently simple way of life.

The carefully rooted realism of the village sequences ensures that the ensuing developments - as the film departs in directions both mysterious and and tragic - are all the more effectively disturbing. Genjuro's encounter with the mysterious Lady Wakasa (played, to startling effect, by Machiko Kyo) is a wrenching viewing experience; that the depths of Genjuro's betrayal can only be revealed by a fatal obsession says much about Mizoguchi's unsentimental world-view. Visually, the film is a feast, with gorgeously composed shots and a camera that seems constantly on the move, rising high over the action, then prowling at ground level, perhaps never more effectively than in the beautiful shot that accompanies Genjuro's return home, and which perfectly encapsulates the film's otherworldly feel. The Criterion Collection treatment underlines, again, what a shame it is that more of Mizoguchi's films aren't available on DVD [this situation has, happily, improved a good deal since 2006, not least through the efforts of the Criterion Collection].