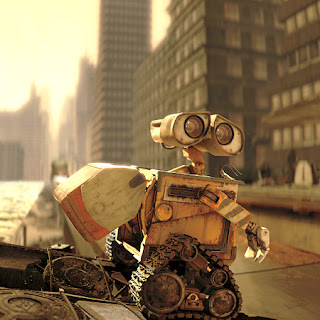 Another movie seen on a plane, I'll have to return to this film at a later date. I found it captivating, with an intriguing storyline that included some pointed commentary on the future of (American) society, while the long wordless sequences were especially, compelling, but the visual qualities of the film, a critical component of all Pixar movies, were so compromised by the screen on the plane that it would do the film an injustice to see it only in that format.

You should watch it again; I'm curious to read your take on it. Like Up, it seems like it is an animated movie whose storyline can be appreciated more by adults than children; though I guess most animated films now have significant elements that are designed to appeal to the parent set.

I thought it was an intelligent movie on a lot of levels, not least of which was its lack of verbal language in the first 30 minutes...very interesting especially in contrast to a movie like Shrek, which revels in double-entendres but which is ostensibly crated for the same young audience.

I'm waiting until Shay is old enough... I was impressed by the film's storytelling style when I first saw it, but I've noticed in the interim that I've started to turn a bit on Pixar, which really likes the Meaningful Moment and that comes across as a bit heavy-handed for me at times.

I liked the first half of Up a lot and thought the opening scenes were brilliantly done, but it lost me a bit in the second half. I wasn't a huge fan of Toy Story 3, which seemed overrated to me, more of a repetition of the first two films than I expected. All of the Pixar films are extraordinary on the visual level, though.