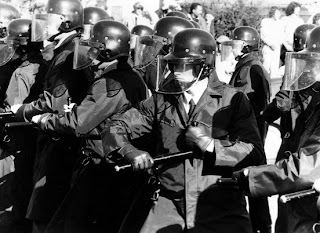 A fascinating film both for its content - an account of protests against the 1981 South African rugby tour of New Zealand - and for its insights into the documentary form, Patu! retains an exceptional immediacy even thirty years on from the events. There's a shocking fury onscreen in many scenes, encapsulating anger at apartheid South Africa and, as the film progresses, at the New Zealand government, which seemed to be prepared to do more or less anything, including turning parts of the country into a fortress as well as sending police riot squads into action against their fellow citizens, to facilitate the tour. As such, the film provides a compelling insight into the sheer levels of force that a country needs to deploy to calm a restive population: the comparison with South Africa itself appears at every turn, duly underlined by the filmmakers.

Merata Mita, a key member of New Zealand's small film industry who sadly died in 2010, doesn't attempt to provide a two-sided account of the events: her film is designed as a corrective to the narrative peddled by the New Zealand government and much of the mainstream media, which tended to present the protesters as unpatriotic troublemakers and denied them a voice. She weaves together an extraordinary variety of on-the-fly footage to create a sense of the very real political and social stakes at the heart of the protests, with filmmakers like Roger Donaldson and Alun Bollinger contributing their skills as camera operators.

There are inevitable gaps in the documentary record, although Mita generally allows the viewer to draw his or her own conclusions rather than providing an over-arching narrative; that said, the use of sound effects that don't always seem to stem directly from the onscreen events certainly heightens the emotional impact of certain scenes. Much of the film is rough and ready, as befits the shooting conditions, but it has exceptional value as a historical record - an insight into the dynamics of protest almost from the beginning of the anti-tour movement, with some of those featured onscreen, like the roots/reggae band Herbs, remaining influential today.


The film is available for online viewing at the (excellent) NZ ON Screen site, which has a terrific collection of New Zealand television, short films, and some full-length features.