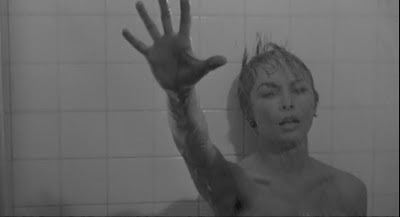 Testament to the continued impact of Hitchcock's film, which is so strikingly modern in many respects: it silenced the hip/hipster audience at the Brattle. Sure, those assembled for the late screening guffawed knowingly in the early going, most especially during the blackly comic sequence in Marion Crane's office as Marion deals diplomatically with both Pat Hitchcock and the attentions of a lecherous customer, but they fell utterly silent as the film began to weave its peculiar spell. The shock moments clearly retain their power, if one can judge by exclamations alone, though what makes them work is the tension created in between, with every interaction fraught with worry. Even now, despite countless pale imitations, Norman Bates is one hell of a villain, played to innocent perfection by Anthony Perkins.