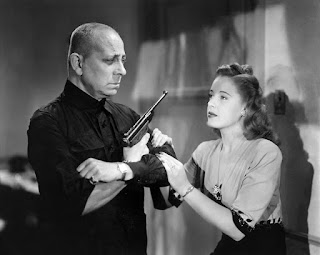 You wonder what must have gone through von Stroheim's mind as he strutted his stuff in fare like this, but to give him his due he always seems fully invested no matter the circumstances and there are moments of genuine poignancy as his character, a stage shooting performer, realizes just how badly he's been had. There's a Double Indemnity vibe to it all, including the narrative, which is almost all in flashback, though the film can't match the cynicism of its predecessor. It's a very early entry in Mann's development as a filmmaker, too, and while there are a couple of nice set-pieces, especially the tense sequences when von Stroheim performs his routine, as well as the visually striking scene when he's interrupted during a practice session.