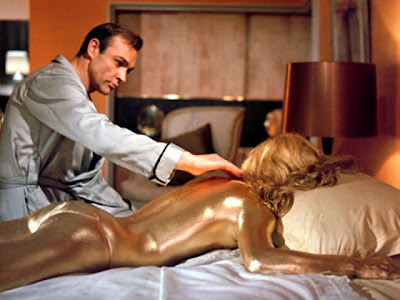 The Bond franchise really swung into high gear with Goldfinger, which features some of the most memorable moments of the series as a whole: the Korean killer Oddjob, with his lethal hat; Gert Fröbe's tremendously villainous Goldfinger; and perhaps most of all, the sight of Shirley Eaton covered head to toe in gold paint, and draped, dead, on a bed. The plot features the usual control-the-world megalomania (although Goldfinger's desire for economic rather than military control is an interesting wrinkle), while Connery looks to be having as much fun as ever delivering smart one-liners (others, too, get their share of enjoyable zingers). He also gets to take advantage of a large complement of Bond girls, who are treated with spectacular disdain -- with the possible exception of Honor Blackman's Pussy Galore, whose name hardly helps her to be taken seriously, but who makes a case as more than just eye-candy. Despite some dodgy back-projection, the stunt work is entertaining, especially in the car-chase sequences, while Ken Adam's sets are, as ever, excellent: the Goldfinger house, with its secret panels and moving walls, is particularly fun.