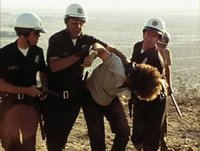 
Punishment Park is an odd mixture of the dated and the prescient, capturing both the hysteria that characterized the period during which it was made (the high tide of the Nixon presidency, and the wave of radicalism that parallaled it), as well as the legal shenanigans of the post-September 11 era. The film intercuts a series of quasi-legal tribunals (mostly featuring young "radicals") with scenes from a bizarre form of punishment camp that involves a desert march towards an American flag (perhaps the most thuddingly obvious device in the film), all shot with a single documentary camera (ostensibly from the BBC). While the documentary style works well - the tribunal scenes in particular have the ring of truth - the predictable involvement, later on, of the film crew is less convincing. The acting, mostly by non-professionals, is exceptional. Director Peter Watkins, making his only American film (but by no means his most radical), threw out his script and coaxed improvised performances from his cast, most of whom were no doubt influenced by the stressful conditions of a difficult, compressed shoot; in that, Punishment Park has something of the air of a live-action Stanford Prison Experiment (conducted the summer after the film was made). The film's key point, that governments tend to be quick to throw out legal norms in difficult times, remains, of course, as relevant in 2006 as it was in 1971; the young policeman's retort that international pressure won't change anything is perhaps the most chilling moment of all.