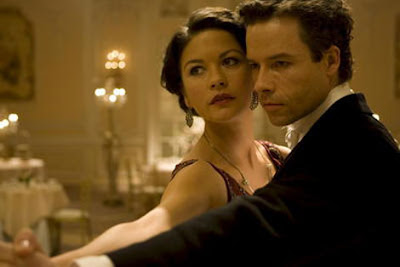 Armstrong also hamstrung by the fact that while the idea of Harry Houdini - her central character - is compelling, behind the mask he comes across as an unappealingly hypocritical man, possessed of an abiding, and overwrought, obsession with his mother. This is, of course, a conscious choice on Armstrong's part as she exposes the illusionist's hypocrisy - as a man not averse to a spot of cheating who then embarks on a crusade to expose what he views as psychic charlatans - but his disagreeable nature makes it very difficult for the audience to then follow the director into the story's more conventional romantic recesses. It's a shame, because there are several wonderfully atmospheric moments that capture the textures of another era - in no sense depicted as a more innocent time - and its pastimes and obsessions.