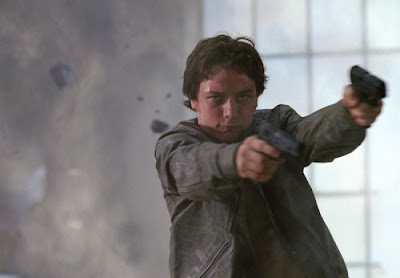 One of those films that belongs only on the big screen, not so much for its aesthetic qualities but for the fact that the kinetic action, blown up well beyond life size, masks absurdities that are much more obvious when the explosions are reduced to televisual scale. The film was shot in Chicago at the same time as The Dark Knight, ironic since it owes something of a debt to Christopher Nolan's earlier Batman Begins, most obviously in the way in which both films anchor the hero's development of particular skills in a rigorous training process (perhaps this is also present in the original graphic novels). Despite the eye-catching action - which reminded me at times of the deliriously over-the-top antics in Shoot 'Em Up - what sticks with me most is the film's merciless depiction of the soul-deadening effects of the cubicle-infested office environment.