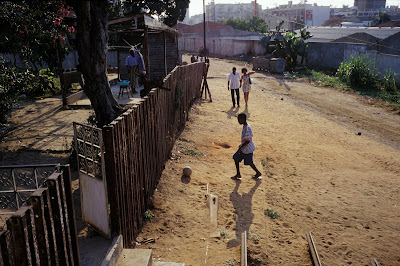 
Zézé Gamboa's debut feature ultimately seems more effective as a starting point for a discussion of Angolan political and social life than as a fully functional film. While it's well-meaning, trying to trace the effects of Angola's decades of civil strife, the character motivations are often rather poorly thought through, and in many ways the film is far more a creature of Hollywood narrative logic than it would like to believe.

The plot is centered on a soldier who has lost a leg in the civil war but who has no place in the Luanda to which he returns after years of fighting. The soldier, Manu, functions as a means to introduce to all levels of Angolan society - the homeless, those trying to keep households together, and the rich who've either lived abroad or who can leave if they wish. While there are moments of striking insight into life on Luanda's streets, they ultimately become lost in the increasingly melodramatic storyline, which moves spasmodically from one scene to the next, with little sense of organic development. The authenticity is undercut, too, by the use of several non-Angolan actors in key roles, most glaringly in the case of Manu himself, played by a Senegalese actor whose dialogue is then dubbed into Portuguese.