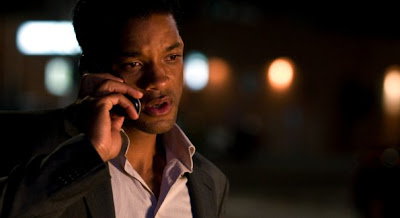 2008, US, directed by Gabriele Muccino

Seven Pounds owes some debt to the Lost school of dramatic structure, slowly dispensing information, often in deliberately misleading fashion, to form a portrait of a highly unusual person. That's not, of course, a criticism: the first season of Lost, with its fine character portraits, remains for me the strongest aspect of the show to date, and while the producers have killed off various characters it seems to me no accident that they've largely stuck with the group we first identified with. However, the framework of a single episode - or feature film - means we're constantly waiting for the big reveal, since the filmmakers can't extend that out to a future segment.

Although I confess that I might have emitted a gasp when it all finally clicked into place in Seven Pounds, somehow the trick overwhelmed the material, unlike in the previous collaboration between Smith and director Muccino, The Pursuit of Happyness, which, for all of its occasional sentimentality in telling the central story of father-son redemption, was grounded in a very real setting, whereas here we're in wealthy anywheresville, and we've lost that connection to a vivid sense of place and daily reality. It's a pity, because Will Smith is, again, very good, the more so when he's pushing further against the bounds of his Mr. Nice Guy persona.