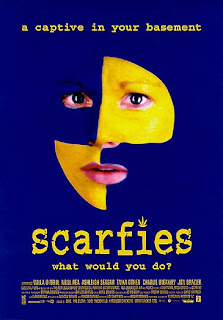 
It's hard to avoid comparing Scarfies with Danny Boyle's début feature Shallow Grave: a motley collection of flatmates, an atmospheric location, an unexpected windfall, an occasionally unsettling blend of violence and comedy, and plenty of visual style. The key difference, however, is that while Shallow Grave featured a very dead benefactor, here the source of the windfall is very much alive, presenting the flatmates with a major dilemma: he's a nasty bit of work, but they have, nonetheless, taken away his income.

As the film progresses, it becomes something of Stanford Prison Experiment in miniature, with the house's inhabitants testing their boundaries as they decide what to do with their prisoner, and their loyalties begin to disintegrate as they begin to contemplate more outlandish solutions; the fun is rapidly leached away once they realize the consequences of their actions. The major weakness here, however, is the fact that the roommates haven't all been sketched in with the same degree of detail: the concerns expressed by Emma (Willa O'Neill) and Scott (Neill Rea) are well-grounded in character, whereas the other roommates are fairly one-note caricatures.

The decrepit old house where the film is set provides plenty of room for visual invention, and Sarkies moves his camera around corners and through floors in clever ways, although it's not always that easy to understand the geography of the place. As much as the film recalls Shallow Grave in its plotline, it's not hard to see the more local influence of Peter Jackson; the hidden horrors and visual trickery aren't a million miles from Jackson's Braindead, although Scarfies is a much more coherent bit of work.