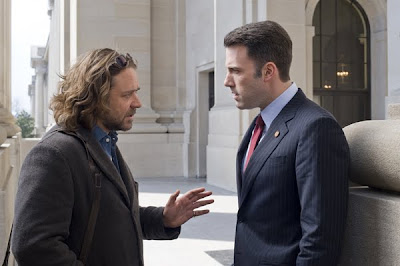 2009, US, directed by Kevin Macdonald

I've not seen the 2003 BBC drama series on which Kevin Macdonald's film is based so I don't know if it portrays the media in more locally-specific ways, but with the exception of a few tech-friendly upgrades, this American remake could be drawn from the Watergate-era glory days of investigative journalism. While the narrative makes much of the transformations American newspapers are currently experiencing - the grizzled hack is contemptuous of the young hire on blogging duty - in the end, it's old-school journalism that gets the scoop.

Perhaps because the filmmakers are squeezing a mini-series into a shorter running time, the action seems very compressed at times, with barely a moment to try to absorb the shenanigans. In a way, though, that's not a bad reflection of the modern cable-news cycle: every event is immediately transformed into a media happening, with pundits on every channel and a reporting frenzy of satellite dishes, laptops, and jangling phones. The only disconnect is that the central journalist, Cal McCaffrey - Russell Crowe, who is much better employed here than in Body of Lies - looks like he's still working with a pencil and a Rolodex. If only that were enough to save the newspapers...