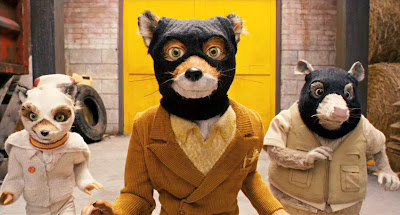 Having grown up on Roald Dahl's original book, I was somewhat skeptical of this transatlantic adaptation, which hybridizes the material by inserting American accents into a very English country setting, but after about five minutes of Wes Anderson's beguiling film it occurred to me that linguistic accuracy is perhaps beside the point in a story that features an urbane talking fox.

Anderson has a great sense of the particular charms of stop-motion animation, as though he'd climbed into the mind of Nick Park without losing sight of his own preoccupations, most obviously the fraught dynamics of family. As in The Royal Tenenbaums in particular, the members of this particular extended family (and wider community) have their share of failings - most notably Mr. Fox's rather puffed-up self-regard - but they're chronicled gently, in ways that never lose sight of the characters' ultimate (and paradoxical) humanity, while there are some brilliant moments of visual and verbal humour.

Notwithstanding my initial misgivings about the American above-the-title talent, the voice work is sublime, particularly George Clooney as the slightly world-weary Mr. Fox and Meryl Streep as his oft-taxed partner Mrs. Fox; despite having the physical form of a pair of animated foxes, they conjure up a wonderfully convincing portrait of a marriage with its occasional tensions and intermittent triumphs.

I just found your blog! Apparently I was viewing some other guy's blog and wondering what the hell the big deal was:) I was just flipping through on my ipod and I must admit, I am super curious about your choice of movies (not only movies to watch but also movies to actually write about). I can't wait to comment (although it's easier to read on the ipod, it's more annoying to comment, so we'll see how much that really happens).
Anyway, we just finished watching this movie and while I didn't have the misgivings you did about the translation re: English to American, I did just read the book to my class in the spring so I was curious...I warned my students that I had neither read the book nor seen the movie so I didn't want any spoilers. I was surprised at how different the book was--even though I can't remember specifics at the moment.
It got me to wonder if you've read and seen Matilda by Roald Dahl...what did you think about the ending? There was a very small change in the movie although I think it resulted in a big change in terms of one of the messages of the movie. I won't go into more detail in case you didn't read the book:)