The Men Who Stare At Goats 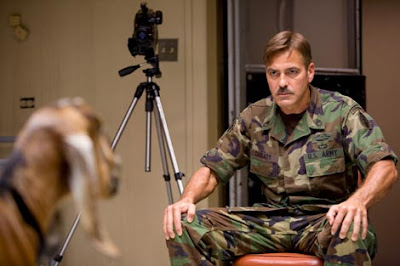 More interesting as an idea than in the execution, The Men Who Stare at Goats suffers from something of an identity crisis, never quite sure whether it wants to be an out-and-out comedy, or a more sober commentary on the absurdity of war. While he gives some sense of the bizarre side-alleys of the US military, which spent some time and money looking at the possibilities of psychic warfare, director Grant Heslov ultimately seems more interested in playing with our image of George Clooney - whose character goes through several unflattering shifts of hairstyle and moustache - than in political commentary. Heslov also creates a major problem for himself by introducing Jeff Bridges in a terrific scene-stealing role as Bill Django, a truly unconventional army officer, and then keeping him offscreen for lengthy, distracting periods while a less compelling story unfolds. The brief montage that provides us with Django's back story looks like an altogether more interesting film than the one that remains.