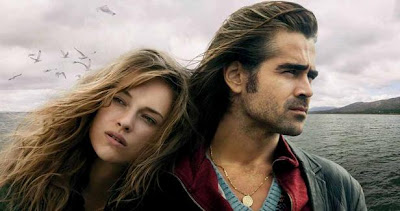 Fables and things not-quite-what-they-seem are recurrent themes in Neil Jordan's films (and novels), and he begins Ondine with no preamble as we see what appears to be a mermaid fished up from the deep off the coast of Cork. The drab colour schemes signal that this is no upbeat fairytale, however, despite the picturesque filming locations; indeed, it's occasionally hard to make out what is going on, as Jordan opts for a very restricted palette.
More challenging again is the dialogue, for the actors frequently speak so indistinctly that it's difficult to make out some of their lines (we initially thought we had a sound problem, but the rest of the soundtrack is just fine). It's presumably deliberate on the filmmaker's part, for as the characters begin to emerge from their shells - Colin Farrell plays the main character, an introverted fisherman - the problem becomes less acute. The accents and colours lend a sense of realism to the more offbeat story elements, keeping us constantly uncertain as to whether we're in the realm of fantasy or kitchen-sink reality; the ending is a not-entirely-successful attempt to marry both strands, straining for a happy ending by dishing out unhappy outcomes for many of the supporting characters.