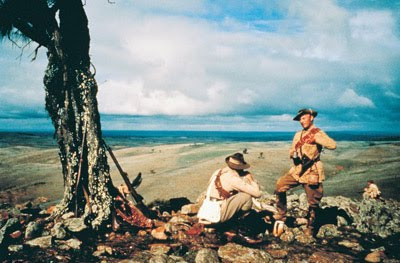 A fascinating, morally complex film, Breaker Morant affords an illuminating glimpse into some of the confusions and contradictions of Empire, centered on a trio of Australian soldiers (one English-born) tried under British military law for their part in events that occurred during the Boer War in South Africa.

In so far as the historical record can be trusted, the provides a fairly accurate account of the actual events that led to the trial, and while the overall tone suggests at least agreement with the notion that Breaker and his colleagues were folk heroes of a kind, their violent actions aren't soft-pedalled. Beresford is more interested, instead, in examining the demands placed on men at war, and the standards of behaviour that they are supposed to uphold.

Unlike Kubrick's Paths of Glory, the men at the centre of Breaker Morant are accused not of cowardice but what might be termed excess of zeal; what unites the films is the way in which military administrations use disciplinary procedures against their own men. There's also, in Breaker particularly, an important class element, with the British hierarchy both profiting from and condemning the more free-wheeling Australian attitude to soldiery (the film takes place against the backdrop of the federation of Australia, although it plays with the timeline somewhat to cast the men as political pawns in a broader game; that's hardly necessary, given that they are already pawns in the hands of the military administration).

The film is drawn from a stage play, and while Beresford "opens up" the play by roaming far from prison and courtroom to dramatise the events at the core of the trial (those scenes are beautifully shot by Donald McAlpine, using South Australia as an effective stand-in for South Africa), he also uses a variety of striking shot choices to avoid a stage-like presentation - close-ups, shots from the side, overhead angles, all of which also contribute to a sense of disorientation in the courtroom which reinforces the sense the justice and logic are being upended. Beresford is also blessed with an extremely strong cast, with two of the mainstays of Australian cinema, Jack Thompson and Bryan Brown, doing some of their best screen work here, abetted by English veteran Edward Woodward as the eponymous "Breaker".