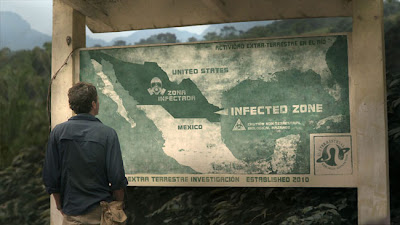 A testament to the triumph ingenuity over budget - it helps when you only give credit to two onscreen players and when the director can wear four other hats - Monsters doesn't for a moment feel like a movie shot on a relative shoestring, making virtues of its limitations and using its Central American locations to atmospheric, often poignant effect. Edwards also realises the critical importance of a good soundscape: whether in scenes of battle or quieter jungle sequences, the sound palette is enveloping and frequently eerie, harking back to the creative use of sound in Orson Welles's radio version of The War of the Worlds. There's also a real sense of interest in the Central American locations - although the protagonists are moving as fast as they can toward the US, the film gives a clear sense of life for those who don't have the same opportunities, and the ending might be read as a metaphor for the experience of crossing onto US soil at the end of an arduous, hope-filled journey.

[Note: This movie received no special consideration despite the director's terrific first name; I was named after another Gareth Edwards].

Excellent film. I remember reading an article about it online somewhere. Apparently all the editing and effects were done on two Mac laptops. As you said, ingenuity over budget.

One of the most enjoyable debuts I've seen - hope he doesn't lose sight of what made this film so strong once he makes the inevitable transition to bigger budgets.