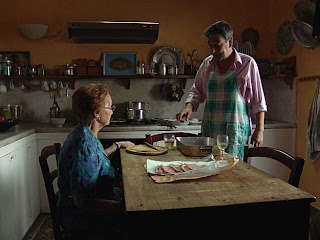 Most of the reviews I've seen for Gianni De Gregorio's film use the word "slight" or some variation, which as far as I can tell is another way for the writers to express the idea that the film is light on plot. That's true - the film is about a few days in the life of a middle-aged slacker, played by the director, while he looks after his mother and several other older women - but the implication that the film itself is thus somehow lacking in substance is entirely misplaced. De Gregorio was one of the many writers credited on Matteo Garrone's film Gomorra, and there's a surprising continuity between the two films - an opening that takes one to the heart of the matter with virtually no context for instance, but particularly the rich series of character portraits, each carefully delineated so that we're able to follow the dynamic that develops between the unlikely group. Equally, there's a profound sense of place, of the details of Rome's August rhythms far from the tourist trail, with De Gregorio indulging his love for the city in the wonderful moped sequence that simultaneously pays homage to Nanni Moretti's very different celebration of Rome in 1994's Caro Diario.  In its quiet way, the film also eviscerates the lip-service paid to the cult of the "mama", revealing the reality for all too many older women without ever allowing the tone of the film to become embittered. Terrific performances all around, too, dignified and honest.