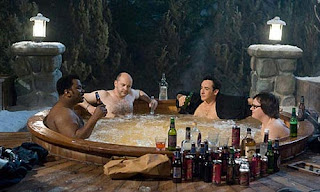 There can be no claims of false advertising with Hot Tub Time Machine: it does indeed feature the eponymous time-travel device, and it's about as silly as you might expect, though at least there's a certain unpretentious honesty on the filmmakers' part. It starts out brightly enough: most of the best jokes are in the first half, at which point the script-writers seem to run out of steam. The second half is a kind of manic, higher-pitched repetition driven mostly by energetic performances from Craig Robinson, by far the most sympathetic of the central quartet of time-travelers, and an incredibly profane Rob Cordrry. John Cusack, by contrast, is reliably catatonic in John Cusack style; although he's listed as a producer here, he gives off the air of a man who can't quite believe, after a quarter century in the business, that he's reduced to starring in fare like this.