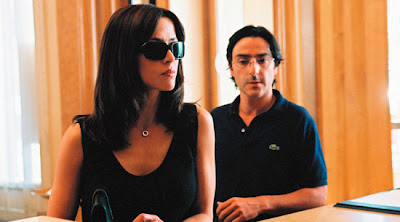 I'm a sucker for this kind of thing -- sleek movies about master criminals and mistaken identities, and the first half of Jérôme Salle's film is a thing of beauty, a little like watching a BMW accelerate smoothly through the gears. Unfortunately, it can't quite sustain that momentum, reverting to something rather more conventional as things wrap up, but I was tempted to watch the thing all over again from the beginning just as the end credits rolled just for the visceral thrill of seeing the well-oiled cinematic machine at work. The central intrigue hinges on a young woman -- Sophie Marceau channelling Monica Bellucci so well that a few years later she was essentially cast as Bellucci in the doppelgänger movie Ne te retourne pas -- who attempts to divert the attentions of the authorities from her lover, the titular M. Zimmer, by taking up with the vaguely sad-sack Yvan Attal.

The film doesn't play fair, of course, suggesting entirely different motivations at times through its shot choices, but that's part of the game. Salle's approach suggests something of a Hollywood calling card -- crisp car or foot chases of the kind that crop up subsequently in Guillaume Canet's Ne le dis à personne or multiple overhead shots of trains and cars criss-crossing the south of France -- but several of the most enjoyable sequences hinge on the precise little details of conversations -- between Marceau and Attal in their first encounter, or Attal and a young police lieutenant, or any of the scenes with Sami Frey, playing the Javert-like cop who has devoted his career to tracking down Zimmer.