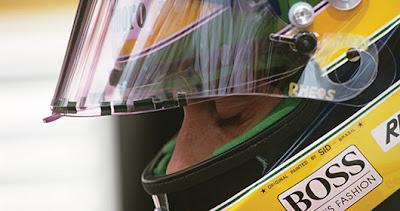 It's more than a little strange to watch a film that's essentially focused on the inevitability of someone dying -- not as a plot point or as the natural end to any biography of a deceased person but as an actual event that takes place in front of our eyes. The fact that I'd seen this same event in real time in 1994, a collision so fast and jarring that you immediately knew nothing good could possibly come of it, even before the screen filled with emergency vehicles and the race at Imola was (temporarily) halted, didn't blunt its effect here, not least because the film creates such an intense impression of Ayrton Senna as a vibrantly alive young man, albeit a young man who seems constantly to be questioning his own goals and reflecting on his (extraordinarily comfortable) life. I'd forgotten just how eloquent and interesting Senna could be -- though as the film makes clear, Formula 1 is not short on figures capable of compelling commentary -- and certainly had no recollection of his expressions of religious faith, which seem at odds with the technological and commercial image of his chosen sport.

Perhaps as a result of the degree of cooperation from Senna's family, Senna doesn't probe too deeply into controversial subjects -- Alain Prost comes across as the relative villain of the piece, at least on the track, but even in a sport with a degree of inherent recklessness it's at least possible that Senna's motivations and behaviour in some of his duels with the French driver crossed the line into heedlessly dangerous territory. It's hard, for instance, to imagine either driver suggesting that they trusted and respected each other in such confrontations -- unlike the memorable encounter between Gilles Villeneuve and René Arnoux at the French grand prix in 1979, when their cars repeatedly touched as they vied for second place.