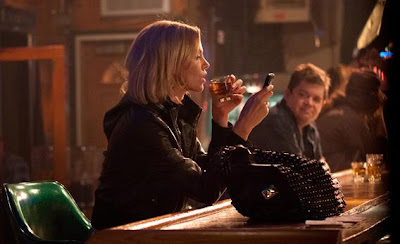 It's refreshing to come across a mainstream American film that so resolutely refuses to conform to standard Hollywood psychology. Charlize Theron plays a genuinely dreadful person, utterly self-obsessed, but there's no attempt to provide her with a simplistic psychological back story -- indeed the film goes out of its way to demonstrate that psychological back stories in no way determine the subsequent ability to behave like a human being -- nor is there that familiar story arc wherein a character learns the error of her ways and grows as a person. That trope -- or tripe -- is so familiar that it's absence is weirdly bracing, particularly when the character at the heart of the film is such a piece of work.