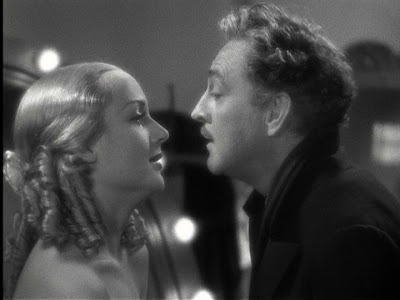 Hawks' film can't keep up the terrific momentum he establishes in the the opening sequences -- it's not quite Scarface in a comic register -- but he's blessed with the presence of a boundlessly energetic John Barrymore, who delivers one of the great comic performances, both self-aware and self-parodying as a Broadway director who never shies away from the exaggerated effect in his personal stylings. By contrast, Carole Lombard is lumbered with too much in the way of irritating histrionics; she's a much more subtle performer than Hawks allows, and there's a repetitiveness to her character that causes the centre of the film to sag. Hawks' work behind the camera is often more subtle than in some of his other films, with careful setups of the actors rather than more visible stylistic flourishes; he frames the crowded train sequences in ways that surely influenced A Night at the Opera a year later, though that film pushed the idea for even greater comic effect. A final thought: at what point did the drunken press man disappear as a Hollywood staple?