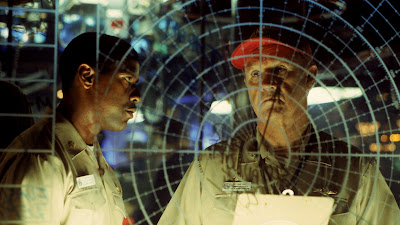 This was our small tribute to the late Tony Scott, one of the contemporary Hollywood directors whose work I most enjoyed -- without a trace of guilt. Visually, at least, Crimson Tide isn't representative of Scott's more recent work -- it's much more classical in its framing and construction, and the Scott's experimentation with the image is for the most part, confined to lens filters or cascading showers of sparks and water. The camera, though, is a good deal more mobile, even in the tight confines of a submarine, where the vast majority of the film takes place, and as such it's quite different to the more static style of films like Top Gun -- in motion in their overall action, but less so within the individual shot. Here, though, Scott's camera tracks up through the submarine and along the individual floors, sometimes moving back and forth to underline the central confrontation between sub captain Gene Hackman, playing a kind of distillation of the gruff Gene Hackman type, and younger buck Denzel Washington. In comparison with many of Scott's later films, the opening is relatively languid -- it takes some time, and a good deal of scene setting, to get us on board the sub, whereas later films often begin with us already within the action, or get us there awfully quickly. In this case, though, the set up works well, giving us reasons to invest in Washington's character in particular, which is critical to Scott's creation of tension later -- the people need to matter for us to buy into their confrontation, just as, a few years later, the back story is essential to our being caught up by Will Smith's sudden flight in Enemy of the State.