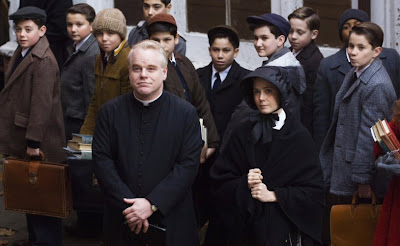 2008, US, directed by John Patrick Shanley
Although my own Catholic school experiences were in the 1980s in Ireland, there's no mistaking the sometimes bone-chilling discipline that writer-director John Patrick Shanley captures here, the idea that wrapped within the iron rod the nuns and priests have the best interests of the child at heart. That many of the teachers actually believed in all sincerity this didn't necessarily make the school atmosphere any more reassuring, and Shanley, among other things, adeptly explores the ways in which such attitudes resulted in an environment where paranoia and fear affected those at the head of the classroom as much as those behind the desks. Indeed, here the young students themselves are more or less a peripheral presence, for the film's concerns play about between adults.

Although he's generally very assured as a director, carefully revealing facts only when he wishes to show his hand, you occasionally wonder whether Shanley has full confidence in his material and his very fine complement of actors, particularly when he feels the need to underline key moments with Dutch angles, a rather jarring choice in what's otherwise a fairly ascetic visual approach. It's interesting that the Dutch angles in Slumdog Millionaire, which seem far more appropriate to that film's intent and energy, were the subject of far more negative reaction, whereas here they took me out of the otherwise compelling world of the film.

(As with any mainstream release, there's no shortage of online reviews of Doubt, but I thought Glenn Kenny's take on the film especially interesting.)