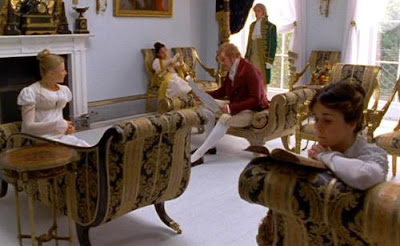 1995, UK, directed by Roger Michell
Released just before the mini-series version of Pride and Prejudice tore across screens, Roger Michell's adaptation of Jane Austen's final novel is altogether less light-hearted in tone, finding something quite dark in the often confined lives of its female characters in particular. It's been long enough since I've read the books to recall whether that's a characteristic lifted directly from Austen's work, but Michell's choices of music and lighting indicate that he's after something more than a vibrant romp (the essential tone of the Pride and Prejudice series is captured in the opening music).


Without entirely embracing a slavish period authenticity, Michell reminds us, subtly but insistently, of the physical reality of Austen's world: the mud and rain, the dimly-lit drawing rooms, the terror induced by what we would now see as minor ailments, and the sense of often debilitating familial regulation. He's able to switch between the queasy handheld camera that gives a sense of the jarring carriage rides that must have been a daily reality, and limpid shots that convey the almost endless parlour days of a life of leisured wealth. That constant concern for the real world makes his characters' dilemmas all the more concrete: we can see the limits within which they operate, and the careful delineations of class and wealth which are an obsession for some and an impediment for others. And, along the way, we're treated to several wonderful performances, particularly Amanda Root and an up-and-coming Ciaran Hinds as a very Austenian hero.