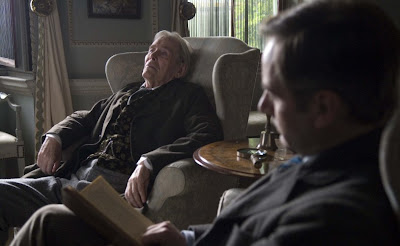 I haven't seen Toa Fraser's first film, No. 2, a contemporary saga of a Fijian community in Auckland that sounds like it breathes some of the same air as Sione's Wedding, but this is quite a change of pace - a (literal) shaggy dog tale set in Edwardian England, with an excellent cast featuring Jeremy Northam, Sam Neill, Peter O'Toole (in full old curmudgeon mode) and Bryan Brown, an actor who's only intermittently found really juicy roles but who's been consistently generous in lending his profile to small-scale Australian productions.

There's nothing particularly New Zealand about the film, despite Fraser and Neill's work, although there's a strong sense of Britain's role as a colonial power, whether through Brown's character, a typical Aussie larrikin who seems to have a finger in every pie, or the frequent references to the Boer War (distant, half-explained war deaths hang over several characters).

Most of the film's pleasures come from watching a fine set of actors interact, with Neill particularly good; he's not always taken that seriously as an actor, but here he punctures his more serious turns - particularly in Jane Campion's The Piano - with subtle humour. Fraser's direction has its own fun with Campion's film, lifting her - occasionally derided - overhead shots of tea and cakes for comic effect. Tea, though, isn't this film's beverage of choice: afterwards, you may wish to run out to investigate the pleasures of tokaj.

Saw this a few weeks ago and enjoyed it, as well. Very unassuming film, not particularly great, but a pleasre to watch. I'm not often a sucker for sentimentality, but the last few scenes made me emotional.

As for the tokaj: I think I share the opinion of O'Toole's character...