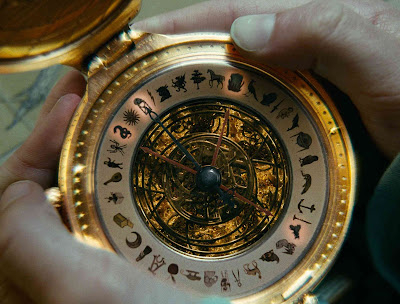 It can't be easy, the business of adapting a much-loved book series and dealing with the fan fallout. But it's a particularly big challenge in this case, since the film jettisons much of what makes the books most interesting - the ideas and even the philosophical questions - in favour of the more screen-friendly plot elements. That wasn't as much of an issue in adapting the most obvious recent comparison, the Harry Potter books, because they're so plot-filled anyway (so much so that the books became very unwieldy as the series continued); the issue was more one of trying to decide which subplots to cull.

There is, of course, a decent helping plenty of plot in Philip Pullman's work, too, which means that ideas such as the relationship between humans and their daemons - a fascinating set of questions about the consciousness and the conscience on the page - are given pretty short shrift here, and indeed aren't always even given satisfying visual form, because the film needs to end with the plot ready to be taken up again where the second book begins. The early sections of the film, in a re-imagined Oxford, are the most successful, mostly for the way in which they posit an alternative yet recognisable reality; as the action transfers to the north country, the CGI effects come to dominate the narrative, and there's no time any longer to linger on the human side of things.

The Golden Compass is an exciting fantasy adventure movie. I watched this movie with my friends in a PVR theater. I enjoyed this movie too much. It has very fabulous story.