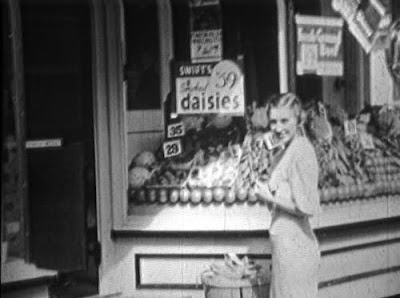 The camera is unsteady, and the editing is brusque, but the face of Vera Sleeper, a newlywed from Bar Harbor, Maine, still has the capacity to light up the screen when she flashes a smile at the audience. She's the star of Bar Harbor Movie Queen, one in a series of films made by the elusive Margaret Cram (Showalter) in the 1930s. Cram would take her camera to a New England town, find a local beauty and film the same plot every time: the lovely lead actress, ostensibly a Hollywood star returning to her humble roots, would admire the town's stores before being "kidnapped" by a gang of heavies played by the town bigwigs, and then rescued by a handsome local hero. As soon as the reels were in the can, Cram would return to Boston for processing and the following week she'd project the unedited film to an eager local audience, many of whom were there to see their own performances. 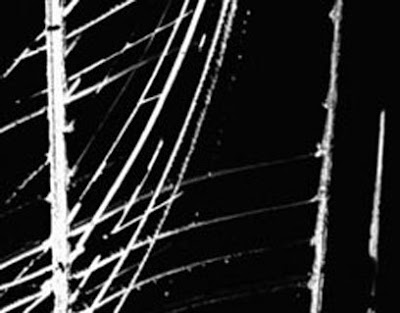 At the opposite end of the scale of cinematic accomplishment, perhaps, are the brief films of Len Lye. Painstakingly constructed over many months and often involving laborious drawing or scratching on individual frames of film, Lye's films are just one facet of an extraordinarily diverse artistic output across three continents, with a tremendous sense of space and rhythm - the relationship between sound/music and image is critical in most of his work - and a constant experimentation with colour or, later in his career, its absence.

In another category again, there's something like Pathé's brief report on a road bowling meet in Cork in the late 1950s, a bit of ephemera fascinating both for its subject matter - even though I grew up in Ireland, I've never seen road bowling - and for the way in which the British filmmakers present the material, with (bad) imitations of the Irish accent or a throwaway reference to the Irish and gambling.

There are dozens of other examples, all of which underline the richness and diversity of film culture. What's important about these three is in many ways the simple fact that they have, happily, survived. The preservation of Margaret Cram's films is an ongoing labour of love for Northeast Historic Film, an organization that has received grants from the National Film Preservation Foundation, among many others, and which focuses on work from and about New England. On the other side of the world Weta Digital, part of the Peter Jackson empire, was responsible for repairing and transferring Lye's Free Radicals, one of his most challenging works, to digital form to ensure its long-term survival, part of an important project of reclamation of an artist who generally worked far from New Zealand (David Bordwell has a great piece on the special challenges of preserving certain avant-garde or experimental films). British Pathé has worked, rather admirably, to ensure the preservation of its own archival materials, recognizing the value in the vaults.

That, to me, is only the first part of the story, however. If such films survive but are invisible to a wider audience the preservation effort seems to serve little purpose, except perhaps for the academic researcher (Kristin Thompson has a lovely anecdote about watching a Len Lye film in a refrigerated room at the British Film Institute, but unfortunately few of us can enjoy that experience). People have worked hard to ensure that these films, once preserved, are made available to as many people as possible, whether through organization of exhibitions - the way I saw the beguiling Bar Harbor Movie Queen - or transfer to DVD (a new book on Len Lye will include a DVD of his films), or the creation of an Internet archive, as Pathé has elected to do (with preview copies of every clip available free of charge).

That impulse, to preserve and present, is of a piece in many ways with the vast explosion of material on a site like Youtube - making available what is hidden or what doesn't exist in any other format. That and other sites indicate to me that we have an enormous desire to see and share images, to tell a friend, to understand our world through what we see - whether it's a clip from an acknowledged classic or a brief moment of more local interest.

It's an extraordinary way to spread the word, although it comes with the problem that watching someone's upload of a Len Lye film, for instance, doesn't contribute much in a direct fashion to the preservation of Lye's films. Like virtually everyone else, I've watched dozens of clips, and entire short films, on Youtube because it's easy and often the only place to find something unusual, and I worry that I've started to accept the blurred images and the seventeenth-generation copies. I'm hopeful that those in the film preservation community can somehow harness our enthusiasm for online watching as they seek to resuscitate and distribute our filmed heritage, perhaps especially because many of the most-ignored films - the avant-garde experiments, the newsreel clips, the local histories - are so well-suited to archiving and distribution online given their brevity.

--
This is my contribution to the Film Preservation Blogathon; you can follow all of the contributions here or here, and I would encourage you to also visit the National Film Preservation Foundation to contribute in very concrete terms to the aims of this blogathon. the Foundation is the independent, nonprofit organization created by the U.S. Congress to help save America’s film heritage. They work directly with archives to rescue endangered films that will not survive without public support.

Update (June 7, 2010): As the Siren has revealed, the funds raised through the Film Preservation Blogathon have had a very practical and happy impact - the preservation of an early silent film, The Sergeant (1910), shot on location in Yosemite. The National Film Preservation Foundation has a clip online.

Labels: For the Love of Film

I agree with your premise completely. I think digitize, digitize, digitize and get it out there. It is preserved if people can still see it. Is it the best quality? No. Does it do anything to preserve the original which may be fading fast? No. But it is still preservation because film is not fine art, it is popular art. It was made to be copied.

I did the blogathon too. My post is here:http://cinemaocd.blogspot.com/2010/02/bootleggers-or-preservationists.html

Thank you for the important point. If a movie is preserved but no one can see it, it's almost as if it hasn't been preserved. On the other hand, we have a lot more opportunities now than we did 25 or 30 years ago, with dvds and the internet.

I love the story about the film with the same plot shot in different locales! Thanks for this post...

Thank you for writing about Movie Queen, Bar Harbor! At Northeast Historic Film We're still sorting out Margaret Cram and her itinerant work. Thanks to Martin Johnson just last week we found her 2007 obituary.

This is a great post. I totally agree with preserving films however we can.
Also great blog.
www.redrosefilms.blogspot.com