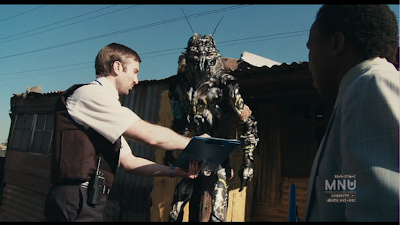 Although Neill Blomkamp’s film is a rather confused apartheid analogy – black South Africans have become part of the system of oppression of an alien race, while Nigerians are characterized as primitive, superstitious, violent people in much the same way as South African blacks were and sometimes still are – it’s a terrific bit of visceral cinema that makes striking use of actual human settlements to make sharp points about the way we treat those different from ourselves. Blomkamp uses the trappings of documentary and news footage – often presented in “raw,” unedited form – to construct the background to a series of forced evictions from an alien settlement outside Johannesburg, with a shadowy private firm stepping in to take on the task of legalizing and enforcing the evictions in much the same way that apartheid governments insisted on a veneer of legality for their actions. 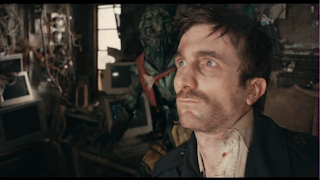 That’s the jumping-off point for a much more personal odyssey, following a previously bumbling bureaucrat, Wikus Van De Merwe (an extraordinarily physical performance from Sharlto Copley, in his first feature film), who finds himself forced to seek allies among the previously despised alien population. Notwithstanding the sometimes confused politics – particularly the uniformly negative depiction of Nigerians, although Afrikaners don’t get a great rap either – there’s still a jagged emotion to Blomkamp’s work that underlines how raw these themes remain in South Africa; it seems no accident that Johannesburg’s residents have been grappling with their “alien problem” as long as real-life South Africans have been trying to carve out a post-apartheid legacy.

Good review, this is not the usual type of film I enjoy. I have to say though it kept me watching and entertained. And I am definitely interested to see what else Neil Blomkamp brings to the silver screen. I get the sense he is someone to watch.