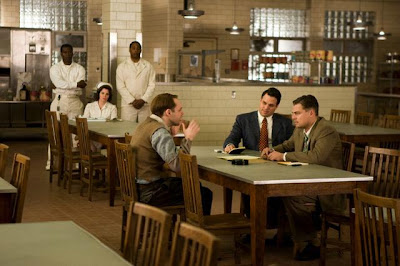 2010, US, directed by Martin Scorsese

While The Departed veered perilously close to self-parody, Scorsese demonstrates an ability to harness melodrama to surprising subtle ends here: it's easy to miss the details of the dense psychological portrait that emerges from the broad strokes of a pleasurably overheated film. Similarly, it's easy to overlook Leonardo DiCaprio's fine work in the central role, given that he's competing with Robert Richardson's stunning visuals, a welter of filmic reference points, and a score that occasionally threatens to overbalance the enterprise (an early scene where DiCaprio arrives at the Shutter Island asylum lays on the musical emphasis especially thickly).

Shutter Island is also a picture that's very much about the artifice of film itself, signalled very deliberately in the opening scene on a boat, with back projection that evokes 1950s Hollywood, perhaps most obviously Vertigo, another film about a man lost in the web of his own memories. The atmosphere on the asylum itself channels any number of old dark house films, although The Haunting is referenced both in terms of plot - the constant interplay between imagination and reality - and in a sequence involving a precipitous climb up a wrought iron spiral staircase. Those homages, though, are very much in service of Scorsese's overall aim of penetrating the mind of one man, through a structure that only retrospectively comes to seem an immense puzzle, ready to be worked through again on re-viewing.