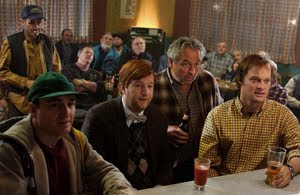 A regional British comedy that somehow ended up in Quebec, La Grande séduction tries very hard for Brassed Off territory - economic woes, a village losing its sense of self - but ultimately has neither the latter film's tough-mindedness nor, ultimately, sufficient respect for its characters - we're mostly invited to laugh at rather than with the broadest of caricatures. It' a pity, because the film starts off quite promisingly with a kind of spoof fairytale opening that suggests a rather more robust sense of humour; the film returns to that tone near the very end, but rarely reaches the same heights for the remainder of the running time, though there is a gloriously surreal sequence when the fisherman-villagers play a rule-bending game of cricket - as part of the title's great seduction - on an island in the middle of the harbour.