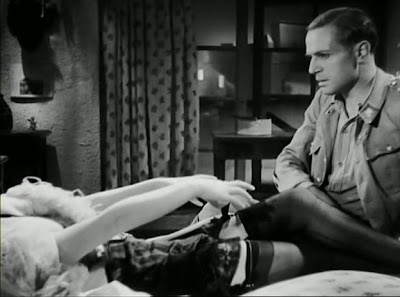 Unlike Sanders of the River, Feyder's Le Grand jeu quite successfully marries its (fairly brief) location footage in North Africa with studio-shot material, although if anything this tends to underline the superfluousness of the overseas setting, which is used mostly as a means to justify using the Foreign Legion as a plot element. While the film further burnishes the regiment's legend, the action could - as Glenn Kenny notes in his appreciation of the film - have taken place more or less anywhere, such is the destructive spirit that animates the lead character, played by Pierre Richard-Willm.

Unfortunately, Willm is perhaps the weakest element in the film: although he didn't start in films until 1930, his style often seems like those of a silent film actor, more mannered and emphatic than was the norm by the mid-1930s; I felt as though an intertitle was about to pop up to provide further clarity. By contrast, supporting players like Charles Vanel and Françoise Rosay (Feyder's wife), who both had substantial experience in the silent days, feel entirely at home here; their cynical view of life's transactions is more in keeping with the film's overall tone, too.

While Feyder's sometimes intoxicating movement - the whirl through the casbah, for instance - is the more eye-catching stylistic element, he's as adept at more low-key moments, extracting great tension from the repeated card-readings (from which the film takes its title). I've always found there's something hypnotic in watching someone perform some feat of manual skill, whether it's Daniel Auteuil repairing a violin in Un Coeur en hiver or Rosay placing a series of cards or pouring a glass of wine - acts that slow down the rhythm of their respective films and draw the viewer into a world of carefully crafted gesture.