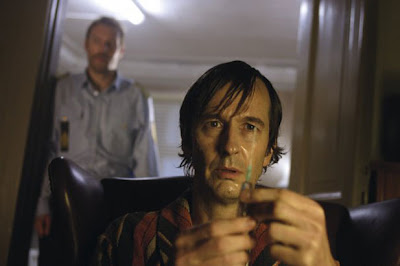 Given the rather low levels of actual violence in Denmark, it has produced a remarkably dark-toned cinema, whether in the form of the concussive urban tales of Nicolas Winding Refn (the actor Kim Bodnia, a veteran of Refn's debut film, Pusher, plays a key role here) or in the more bucolic settings of The Green Butchers or Terribly Happy. Indeed, the notion that the the countryside hides much greater horrors than the big city is the film's running - if overplayed - joke, with a big city cop finding himself in an apparently byzantine world of criminality far beyond his usual experience. For the most part, director Genz plays things very straight, controlling the tone in ways reminiscent of Patrice Leconte's Monsieur Hire, although the insistent repetition of incident ultimately makes the film seem rather longer than it is; that said, a genuinely disturbing scene about halfway into the film gives the tension entirely new, distressing dimensions that underline the sense of psychological turmoil experienced by the main character.