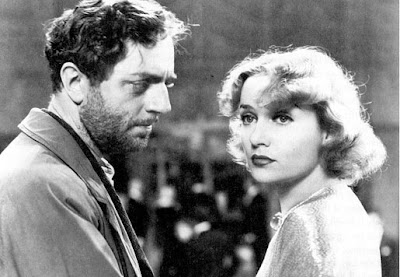 Like many a Depression-era film, My Man Godfrey plays the social commentary light, with the generally privileged characters exposed to the tougher side of the life - the shanties and "forgotten men" - without ever being in any actual danger of joining their ranks (indeed, at some points the film seems to suggest that impoverishment is a robustly authentic lifestyle choice).

In any case, incisive socio-political analysis is very much a subsidiary concern for one of the zaniest of the screwball comedies, which features a wealthy young woman, played by Carole Lombard, whose eccentricities make many a Katherine Hepburn character seem even-keeled. As amusing as Lombard is, delivering dialogue at a blistering pace, the film is hardly the best advertisement for the subtleties of her talent since her character is such a relentless ditz (you can imagine Gregory La Cava offscreen gesturing wildly, "more ditz! more ditz!"). William Powell gets to display much greater range, playing essentially three versions of his character, with subtle transitions from one persona to the next; none of those personas seems a likely match for Lombard, but that's the magic of Hollywood, and the pacing is generally so swift that there's no time for reflection (entire trips abroad seem to pass in a flash).