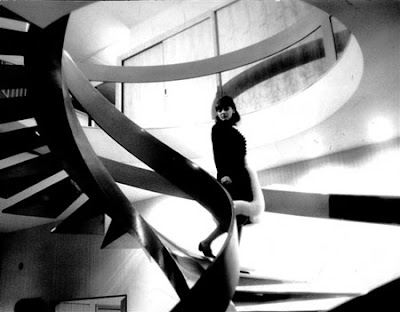 Like most of Godard's films of the 1960s, Alphaville manages to combine high seriousness, in the form here of an interrogation of the crushing anomie of modern urban life, with self-deflating comic riffs. He inserts a series of running jokes - Eddie Constantine batting away hands proffered in hopes of a tip, the constant rote answering of a greeting never delivered, a series of lines that are the titles of books or films - against luminous black and white images of soulless, even soul-destroying, offices and monolithic buildings. At times, the two collide completely, as in a shot of a block of low-cost apartments accompanied by a voiceover that puns on the meaning of the French acronym HLM, the letters used to designate such buildings.

As with other Godard's films, I'm sure that one could compile a detailed glossary of allusions both literary, historical and visual, but I was most struck by the occasional correspondences with Melville, presumably on the strength of viewing several of the latter's films in quick recent succession. There's a terrific scene in Alphaville with a swinging lightbulb, often presumed to refer to Welles's Mr Arkadin, though I wonder if it might not equally allude to Melville's Le Doulos, in which two characters even comment on the strange effect of the light. Of course, these things are hard to trace to any one source, given that just yesterday I came across a discussion of the exact same effect in films from 1932 and 1947... For a Melville-Godard connection in the other direction, though, there's always the blink-and-you'll miss it fight scene between Constantine and an uncredited Leon Minisini, who crops up in a minor role in Melville's final outing.

Picture lifted from the blog Cinemania, though I'm not sure if it's original to that site.