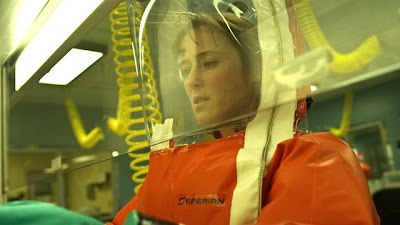 Not, in retrospect, the best choice of film to watch on a plane, particularly given that the contagion in question first makes its onscreen appearance--at least in so far as any microscopic item makes an appearance--at an airport bar. The illness fans out from there like cracks on a windowpane, collapsing everything in its path. That initial sequence is a useful primer on Soderbergh's technique for the rest of the film, as he uses quick, informative shots to describe the sequence of infection and the (panicked) reaction thereto, thus compressing large amounts of detail into a brisk running time.

There's little time for back story with such an approach: each time we see an infected person, he or she looks exponentially worse, so we can rapidly grasp the seriousness of the situation, and if Gywneth Paltrow's much-ballyhooed cameo appearance as Victim Number One seems brief, her character has vastly more screen time than the other initial victims, who are collectively dispatched within a couple of minutes of screen time. Soderbergh subsequently uses other tools--television news, scientific teleconferences, screen graphics--to keep up the momentum, while also cutting between a half-dozen major characters, though the narrative drive is so strong that his leads tend to have Meaningful Moments rather than fleshed-out biographies. Only Matt Damon's character gets a little more space to develop an individual personality, partly a function of his role as a bewildered audience surrogate.