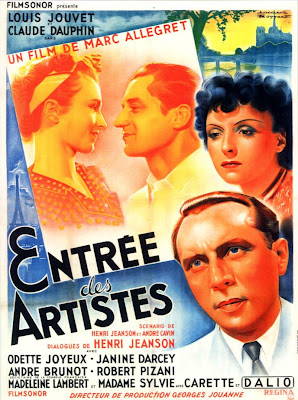 As in so many of his films, particularly from the 1930s, Louis Jouvet is offscreen for much of the running time of Entrée des artistes, and his absence for long stretches here only heightens the sense that much of the remainder of Marc Allégret's film is rather routine. The narrative mostly focuses on the petty, even vicious, love squabbles between a group of theatre students overseen by M. Jouvet, who is presumably playing a role not a million miles from his offscreen professional life at the head of a theatre company. The moments when he seems to be most fully inhabiting that real-life role are wonderfully rich, as he gives gentle direction to his charges and takes an interest in their home lives; there's nothing of the Svengali about this particular man of the theatre, though the students clearly regard him as possessing great power.

The sequence where Jouvet visits the laundry where one aspirant spends her days is an absolute treasure, with his character tamping down a distaste for the surroundings only to find it erupting again in the face of blatant philistinism he encounters when attempting to persuade the girl's relatives of the value of her new career choice. As he departs, he mutters "quel atmosphère," a word made immortal a few months later by Arletty in Hôtel du Nord -- and in Jouvet's presence. The two films share a writer (Henri Jeanson, author of many an immortal word) and I wonder if Jeanson liked the sound of the word so much he reused it soon afterwards, as the two films were made in quick succession. Jouvet gets most of the best lines here, but his supporting cast is also filled with treasures -- Bernard Blier in a very, very early role though he's already portly and bald, Julien Carette, the poacher from La Règle du jeu, Roger Blin, a very sinister heavy in L'Alibi, Marcel Dalio... It's all testament to the extraordinary richness of the French cinema in the era, with even the bit parts seemingly played by actors of some consequence.