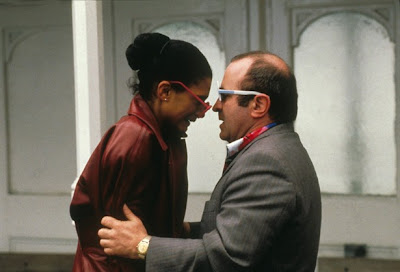 Neil Jordan's films often have a tendency toward the fairy tale, and I had a bad feeling about the direction Mona Lisa seemed likely to take when Bob Hoskins' small-time gangster started falling for the high-end hooker (Cathy Tyson) he's employed to drive around. It's a relief, then, when Jordan goes down less obvious paths, concocting something that's a vaguely London variation on Paul Schrader's Hardcore, with Hoskins, who has just emerged from prison, descending into the tragically cheap underbelly of the London sex trade.

This is territory on which many a filmmaker has foundered, caught between ogling the seamy goings-on and finger wagging: Jordan uses the Hoskins character as an oddball surrogate, with Hoskins generally more repelled than engaged by what his pre-prison colleagues do to make money, while there's barely a hint of glamour in the sex trade here. Hoskins's glimmers of conscience set the stage for a redemption that manages to be simultaneously a touch too neat -- shades of the fairy tale again -- and surprisingly convincing. Hoskins finds ways to make an initially unsympathetic character far more nuanced, with the character's growing awareness of how others see him both tragic and oddly triumphal, while Michael Caine does a fine job with the part of Hoskins' terrifically seedy boss, desperately trying to swim in more exalted waters but undone by his baser instincts.

Get daily ideas and methods for generating THOUSANDS OF DOLLARS per day ONLINE totally FREE.
GET FREE INSTANT ACCESS